Recognition of Volunteers/Donors on the Day of Million Meal Celebration

HACSI celebrated the momentous occasion of having cooked ONE MILLION Meals from 2007-2017 at DC Central Kitchen with a gala event on November 11 th 2017.On this momentous occasion HACSI recognized and honored its dedicated volunteers and compassionate donors. None of this could have been achieved without the commitment and benevolence of our volunteers and donors representing 30+ Hindu/Jain groups.Each group was individually recognized. The event was well attended by hundreds of Volunteers and Donors. 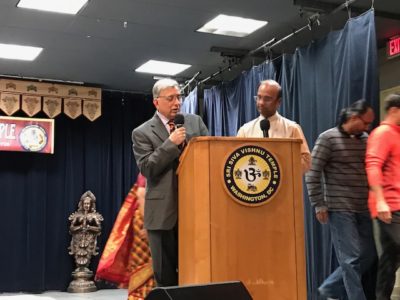 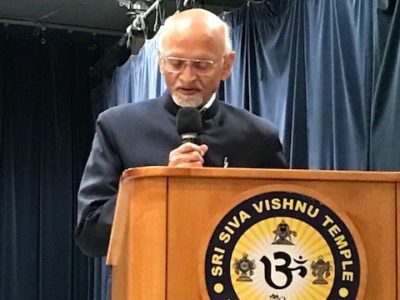 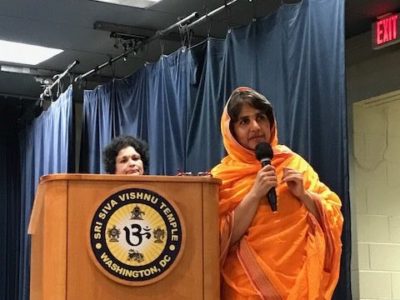 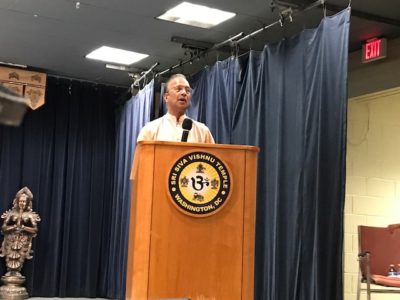 In 2017 HACSI received Community Service Award from Indian Cultural Coordination Committee. The award was given to HACSI for mobilizing the “spirit of giving” of Hindu Americans to assist those in the local community, who find themselves in adverse circumstances.

In 2013 HACSI received two prestigious awards for its community service activities. On May 22, 2013 Interfaith Conference (IFC) presented HACSI with its Bridge Builder Award for its contribution to the interfaith activities and the community service provided by HACSI, irrespective of the color or community, race or religion. India abroad wrote an article “Prestigious honor for all-volunteer desi organization in capital area”. HACSI received the Social Service award from National Federation of Indian American on June 7, 2013. The award was given to HACSI for mobilizing the “spirit of giving” of Hindu Americans to assist those in the local community, who find themselves in adverse circumstances. While HACSI does not perform any community service activity expecting any recognition or reward, these publicities help HACSI’s mission of encouraging more Hindu Americans to perform Community services to the local community.

Every year, the Interfaith Conference of Metropolitan Washington recognizes individuals and organizations in the capital area making significant contributions to building awareness and appreciation for the different faith communities in our area. The service of hundreds of HACSI volunteers to feed the homeless, and the other educational activities of HACSI were judged by IFC to be such bridge building activities. On May 22, 2013, at an event held at the American University, IFC presented HACSI with its Bridge Builder Award for its contribution to the interfaith activities and the community service provided by HACSI, irrespective of the color or community, race or religion.

One of HACSI’s aims is to encourage a balanced presentation of Indic religions (Hinduism, Buddhism, Jainism and Sikhism), so as to remove some of the stereo-typical views about these faiths contained in some of the school text books used in US.

HACSI’s efforts in this regard consist of:

Funding the distribution of the PBS documentary Asian and Abrahamic religions: A divine Encounter in America, produced by Auteur productions.
HACSI has presented this DVD with a Teaching Guide to 350 high schools in D.C., Maryland and Virginia. In fact, the production of the documentary was funded by the directors and volunteers of HACSI.
HACSI has donated funds to improve IFC’s website, and to support production and marketing of STAR – Strengthened Teaching about Religions, an IFC publication..

HACSI is now serving more than 100,000 meals every year to needy in the Washington Metropolitan area.

In the award acceptance speech, K.G. Venkatraman (Ramani) said the following: Service to the needy is the real Bridge among various communities.

“Hinduism is not a religion. It is a way of life. It is originally known as Sanathana Dharma. It means Eternal Way of life. My knowledge of scriptures and rituals are very limited. But I was taught in my school at the young age, that the goal is one but the paths are many. There is only one God. We all call it differently. God has no form but can take any form. He is Omnipresent, Omni potent and Omniscient. One of the core principles of Hinduism or Sanathana Dharma is to help the needy. It is a universal belief in all religions. We all believe the Service to Humanity is Service to God. Service or Seva has no religion or color or ethnicity barrier.

When we help the people in Oklahoma affected by the tornado or help the people in New Jersey and New York affected by the storm Sandy or feed the people suffering from hunger in Africa it is a service to God. It is through these services we can unite the various generations, communities, countries, Religions, and faith groups. We see God in every living being. As our Guru Dayanadha Saraswathi says “It is not that there is one God, it is that there is only God everywhere. If we take that approach and serve each other lot of the problems in the world can be solved and there will be eternal peace and Prosperity and bliss. Hence service to the needy is the Real Bridge among the various communities, countries and various religions and faith groups. I would like to conclude by saying that it is not only essential to build this bridge of service but also essential to maintain it forever.”